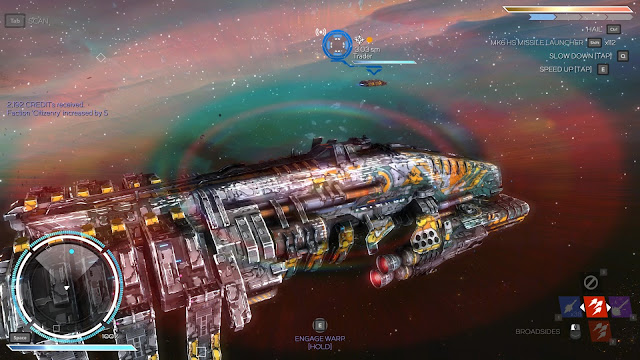 So you want to buy new ships but short on money? Using the Cheat Engine cheat for Rebel Galaxy, do this money tips to get more cash quickly in legit way: 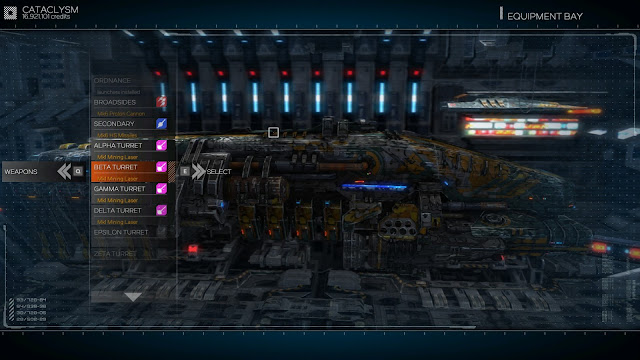 If you are going after the bigger bucks then you need to go and buy some mining lasers, they are essential for getting those higher level commodities. The higher the Mk the faster it digs but grade 1 will do just fine if you are patient. Fault tracking won't be helpful with the type of meteors you will be mining if you are after those Faces. 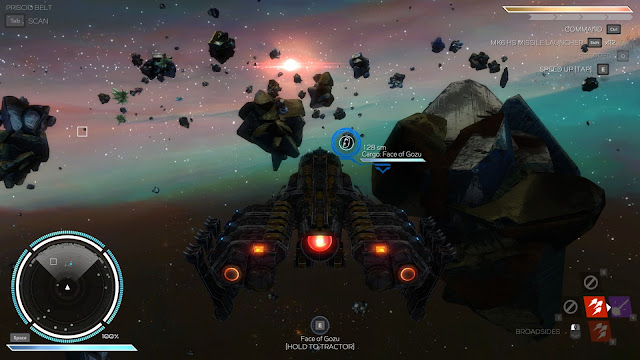 Now before we begin I would recommend completing this guide with some more common commodities, it can take a super long time to find the right asteroid field but keep an eye out for them there space rocks as they are worth their weight in gold credits.
This is the long and time consuming part, but it only has to be done once. You need to find asteroid belts that contain the rocks shown in the picture below. They are rare but not impossible to stumble across, they can even spawn in the starting system. When you finally locate one look for the biggest rocks you can find and mine them. It takes a really long time to cut them up as they are super tough but once they break you not only get Gold Ingots but a Face of Gozu too. (Having one of those in the hold is also an achievement on its own). 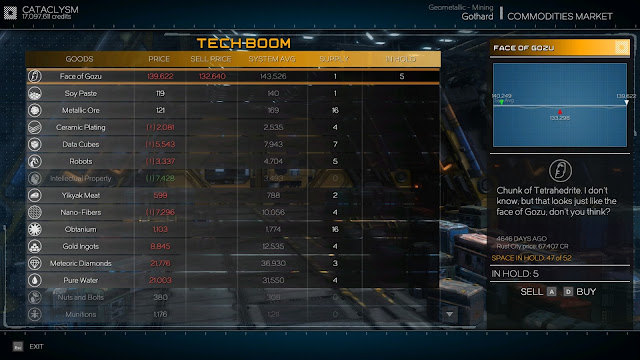 Once you have managed to mine between 1 and 5 of the Faces or 5 of any of your chosen commodity head back to a station and sell everything else but keep the chosen item in your hold, they need to be the only thing in your ship for this to work. Also I know it’s tempting to sell any Faces you have right now but you can make a way more money with a little piracy. Speaking of which switch out the mining lasers for something with a little more punch, you won’t need to do any more mining (unless you are going for the miner 49er achievement) and the lasers sell for full price. 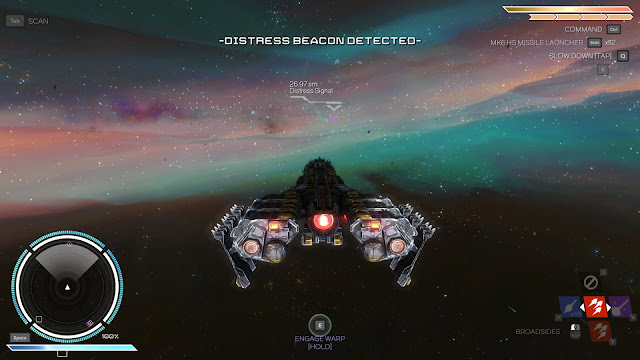 Go out into the big black and search for someone to trade with. There are enough merchants floating around for you to bump into one fairly fast. But if you get a message regarding a distress call as shown below head straight to it and save the trader in question for a shortcut to the next stage and some extra credits to boot. (Save enough traders and that’s an achievement). 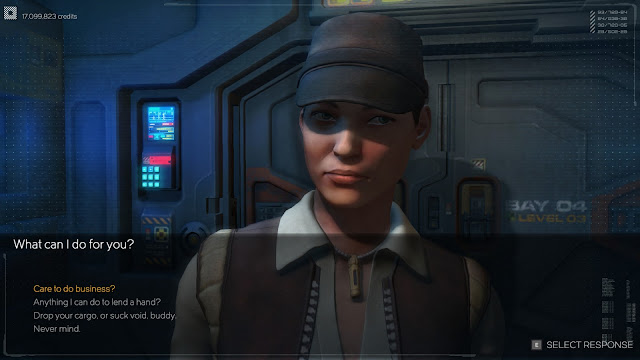 Hail the trader by either bringing up the control wheel whilst they are your selected target or scan them and to get the option to hail that way. This brings up the conversation screen seen below. Select "Care to do Business" to begin. 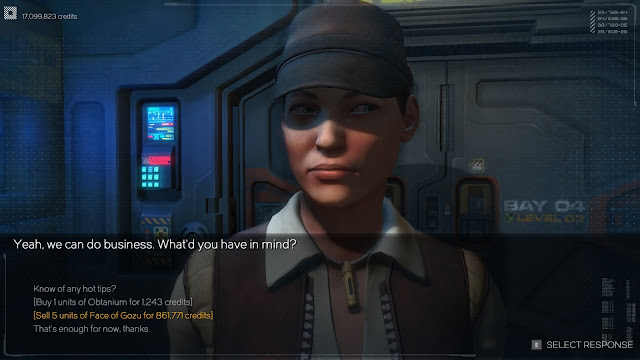 If the high value commodity is the only thing in your hold the trader will offer to buy them at a very good price every single time and can purchase up to 5 of them at a time, which is why you only needed to mine 5 in total. (Selling to them once is another achievement). If you happen to have anything else in your hold and they offer to buy that instead exit the conversation hit pause and go to your cargo hold and jettison any other cargo, you can always pick it up again later. The reason you do this is each trader only buys or sells to you one time only, don’t waste the chance on a lesser item. 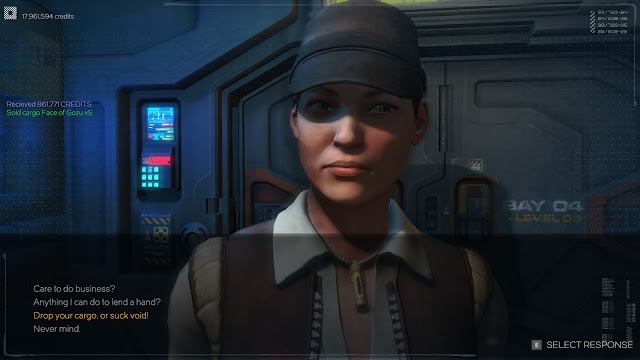 Once they have bought your item it’s time to get it back. Return to the start of the conversation and select the option "Drop your Cargo, or Suck Void". One of two things will happen; if they give in they will give it back to you as well as everything else in their hold as an added bonus. If on the other hand they resist they will turn hostile and I'm afraid you will have to try rather more deadly persuasion to get your stuff back. (Pirating a trader is an achievement). 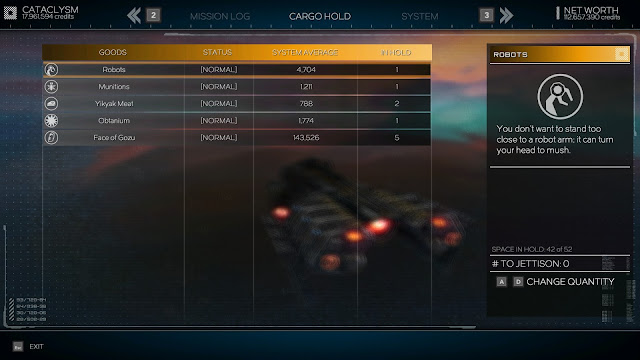 So now the trader is either running away or floating through the coldness of the black and you have all the money they gave you for your items, the valuable commodities themselves and everything else the trader had in their hold. Return to a station, sell everything other than the chosen commodity and head out again to start over. It won't take long to make big bucks as you can pull in between 200k and 900k if you are selling the higher value items.

It's the fastest and safest way I found to make money. That is until you can afford the huge ships and go after the more difficult missions. If you are worried about your citizen relations do a couple easy citizen missions every couple of trades and it will balance out. Infact saving the traders before double crossing them gives you some goodwill also.

The fields you need for the Gozu have the massive rocks like the one on the right side of the ship in that picture. There should be between 7 and 10 of them and maybe a few smaller ones in the field. But the fields are very rare. A view others have suggested that you use more common commodities like pure water for a while and eventually you will stumble into a field like that filled with Gozu. Since that is the hardest part and due to every playthrough being random it will take the longest. Sometimes the Miner ships carry progenitor shards, those are also worth a lot of money and can act the same way. there is also a pirate mission, if you take the pirate path, that gives you 5 antimatter, not sure if you can use them and get them back before delivery, may be worth a try if all else fails.

Try the "blockade runner" missions from the merchants guild i had one pay 325k for alien artifacts and i was not out of the first system yet! but scince blockade running is not timed, it is entirely possible to kill the guard using death of a thousand cuts. get in range of the farthest dude and pull him away from the mob, kill, repeat.

The "super swarm" missions pay well (using mk3 gear, second system,130-160k a peice ) but when its the last guy left kill then run as a ring of fighter mooks will show up. as long as you are fast enough you should be able to break one edge of the encirclement. from there just eat your way through them.

When you see a skull on Yoru Map drop, do everything and chase it down. They spawn very infrequently and take a really really long time to get all 20. If you want legit money fast the trader guild is the best way, but if you are making a delivery travel to a space station near by to save then make a run for the target station and keep going even when fighters show up, they will take you apart if you fight so shield, deflector then shields until you can dock with the station.

GameHunters.Club is a Fan Base Site and is not endorsed by or affiliated by Rebel Galaxy. 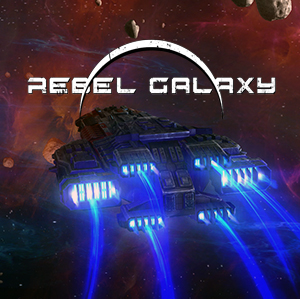